History of Priory BC

In 1926 the East Anglian Whist Club decided that an outdoor pursuit was healthier and formed a bowls club, playing originally on the Southsea Castle Greens, and called themselves the East Anglian Bowling Club. The members at that time were mainly from east Anglia.

The first President was Mr Sax Friston, and the Secretary was Mr A. Carter. Another notable long serving officer of the club was Dr Montague Way, who had the honour of serving as President of the club from 1935 to 1947.

In 1929 the club decided to move to the green vacated by Milton Park BC when they moved to a new green which had been laid alongside.

By 1934 most of the members were not East Anglian and in September 1934 changed the name to Priory Bowling Club adopted from the adjacent Priory Crescent.

Two of the most successful Priory bowlers were Mr C. Large  Mr J. Stokes, who won the Hampshire County Bowling Association pairs competition in 1951 and went on to represent the county in the Middleton Cup.

Mention at this point must be made concerning Mr Ted Bulbeck who joined the club in 1958, was a past President of the club and on 17t March 1999 celebrated his 102nd birthday. Two members have served as President of Portsmouth & District Bowling Association, namely R.W. Balmer in 1974, and E. Facey in 1978.

The club badge was originally the coat of arms for the Fitzherbert family, who in the middle ages owned most of the land around the area. The club badge is registered as "Three falcons argent with their bells & jesses ore on a sable background, a shield with argent border, scroll with the word Priory". 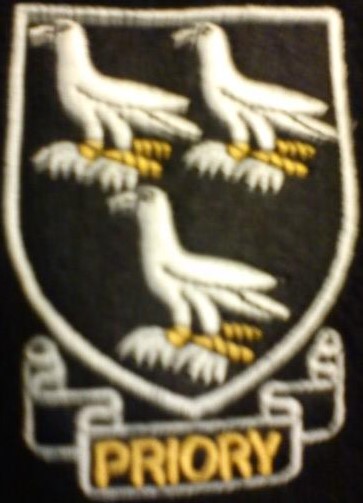